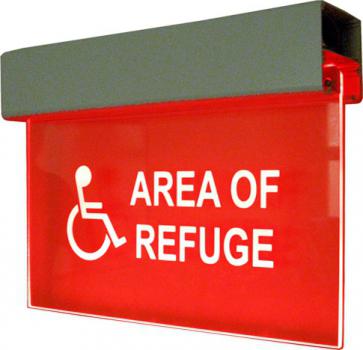 The RSN7050 series sign(s) shall operate on 120/277vac and shall built-in battery back-up, and Red LED lights. Sign(s) shall be made of white aluminum housing with acrylic surface.

Contractor shall furnish and install one (1) RSN7050 (single sided) or RSN7050D (double sided) sign to be placed by each "Area Of Refuge" location, or as directed by the local AHJs.

Contractor shall observe all local and national electrical and building codes.

The Alpha Communications® RSN7050 (single sided) and RSN7050D (double sided) Lighted Area of Refuge Signs are used with the AlphaRefuge™ 2100 and 2400 Series Area of Refuge systems, and can be used with other manufacturer's ARA systems.

The RSN7050 Series signs are powered by 120/277VAC and have built-in battery back-up and Red LED Lights, to comply with the current building codes.

Typically, one RSN7050 Series sign would be placed at each "Area of Refuge" location, to identify that location for building visitors and residents, for ARA code compliance.